Is It Cheaper to Run a Fan or an AC in Arizona in the Summer? With temperatures that can get up above 110 degrees, Arizona summers can get uncomfortable fast without a fan or AC unit to take the heat down a notch. When you run an appliance to cool your home in an Arizona summer, the costs can add up quickly. That’s why understanding energy costs and how to use both your AC and fans to maximize energy efficiency makes sense.

Fans and AC units use electricity to run, but the amount of electricity they use per hour differs tremendously. This chart breaks down the typical energy usage by fans and air conditioners:

As this chart shows, fans use far less energy per hour than an AC unit does. Therefore, per hour of use, your fan is going to cost less to run. Keep in mind that energy efficient air conditioners use 10 percent less energy per SEER point, so the higher your SEER number, the lower your energy bill for each hour of use. An older unit – particularly if it’s more than 10 years old – will cost you more money than a newer, more efficient model.

It’s not quite possible to compare apples to apples when looking at the costs between fans and air conditioners. A ceiling fan can only lower a room’s temperature approximately 5 degrees (and only in the room it’s installed in). It will not affect the surrounding areas.

You also need to consider where the fan is running. An attic fan, for example, can help significantly cool down your home, while a kitchen fan may have less of an effect when major appliances are running. Running fans in every room of the house to try to equal the cooling power of central air conditioning will also negate some of your savings (while keeping the air temperature higher).

Getting the Right Mix

If you want to save money on your energy bills this summer while still keeping your home comfortable, consider the use of both a fan and an AC unit. Because a fan can lower the temperature as much as 5 degrees, try setting your thermostat at 5 degrees higher and running a fan only in the room you are in. This will keep your home in a comfortable temperature range and reduce your energy costs. Fans will help to maintain the temperature of the room so that the air conditioner does not have to kick on quite as often. Running a ceiling fan while you are away rather than the air conditioning can also help to save energy costs because the AC won’t be running constantly in an empty home. (And it won’t have to work as hard to lower the temperature again once you return.)

It’s always a good idea to look at different ways to lower your energy costs. Make smart use of both your fans and your air conditioner this summer— and keep cool while lowering your energy bill

Previous
What is Air Balancing?

Next
How Do I Balance the Air Being Supplied to Each Room of My House? 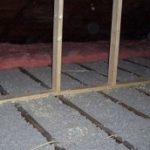 How Much Attic Insulation is Recommended?

How Does a Home Lose Heat and AC? 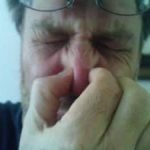 Why Does the Air Conditioner Smell? 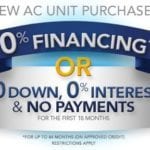 How to Get Financing for an AC Unit