How Do Air Conditioners Work? You probably don’t think twice about your air conditioning unit when it works properly, but it’s a really amazing piece of equipment. The first air conditioners were developed in the early 1900s by Willis Carrier as a way to remove humidity from the printing plant where he worked. But these simple appliances soon revolutionized the way people cooled their homes. (If it weren’t for the humble air conditioner, it would have been difficult for Americans to settle the desert Southwest.)

An air conditioner is more than a magic box of coils and wires — it’s a finely tuned machine designed with some basic engineering.

Your air conditioner is made up of many parts, but the most important parts are the compressor, condenser, expansion valve and the evaporator coil. Each part plays a vital role in the refrigeration cycle by helping to circulate and regulate the pressure of refrigerant throughout the system.

In the condenser, the hot refrigerant is cooled with a fan as it moves through a finned coil. The rapid cooling caused by this configuration causes the hot vapor to change its state — into a hot liquid. (The refrigerant is still under a great deal of pressure.)

The expansion valve has a tiny opening that allows hot liquid refrigerant to pass through, a little bit at a time. The small amount of refrigerant that passes through the valve has plenty of room to move, and it expands dramatically, cooling as the liquid mist sprays out.

The cooled liquid leaving the expansion valve heads for the evaporator coil, where the air coming from your home through the air return is blown across the coil (which is very cold). The air moves across the coil and back into your ductwork, cooling your home. As refrigerant is heated by the warm air entering the system, it expands into a gas and moves back into the compressor.

In a well-sealed air conditioning system, the refrigerant travels around and around, where it is compressed and allowed to condense into a liquid over and over again. (One trip around is a refrigeration cycle.) The process is similar in your refrigerator and in your vehicle; those systems, however, have to cool a much smaller area. And unlike smaller systems, your home’s air conditioner relies on good insulation and a vent in the ceiling to help keep your home cool.

If you imagine the air in your home as a bunch of tiny balloons floating around and bumping into each other, it can make it easier to visualize how hot air moves into an air conditioning system to begin the cooling cycle. Those balloons heat up at different rates, and as they heat up, they float to the ceiling. They are eventually sucked in by your air conditioning system through the large vent in the ceiling, which is called the air return.

From there, the balloons (air) travel through the ductwork into the evaporator coil, while the expanding refrigerant dramatically chills the evaporator coil. This action cools the incoming air quickly, and that cool air is now unable to hold as much humidity as it did in its warmer state; the excess water drops onto the coil into a pan underneath. Air that has gone through this full process is blown through your ducts as cool, dry air.

Your thermostat keeps track of the temperature in your home, and as the cold accumulates (visualize balloons stacking up on the floor), the system is signaled to turn off. When the air begins to warm again, the system flips back on to pull that warmed air in and send it through the cycle again. This cycle repeats over and over, 24 hours a day, at any time that indoor temperatures are at a determined high point.

Previous
How Do I Balance the Air Being Supplied to Each Room of My House? 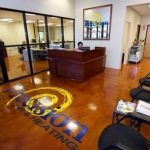 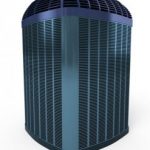 Buying a Central Air Conditioner in Phoenix: Everything You Need to Know

How to Reduce AC Energy Consumption in Phoenix, AZ